Hedge funds are betting on another run of yen weakness, a trade that made money earlier this year for billionaire George Soros, putting them in opposition to economists who see Japan’s currency little changed into 2014.

Futures traders pushed net shorts, or wagers the yen will fall versus the dollar, to the highest since July 2007, according to the Commodity Futures Trading Commission. That contrasts with the median estimate of more than 50 analysts surveyed by Bloomberg, which puts the currency at 102 per dollar at the end of the first quarter of 2014, from 101.47 today.

Japan has resorted to an unprecedented $70 billion of monthly bond purchases since April to depreciate its currency, boost growth and combat deflation. The yen has plunged 15 percent this year, on pace for the biggest drop since 1979.

“Everybody likes dollar-yen higher,” Brad Bechtel, the managing director at Faros Trading LLC in Stamford, Connecticut, said in a Nov. 22 interview. “And everyone has it on.”

The yen fell to as low as 101.92 per dollar yesterday, the weakest level since May, when it slid to a 4 1/2-year low of 103.74. While it gained for the first time in four days today, its decline this year makes it the worst performer after South Africa’s rand among 16 major currencies tracked by Bloomberg.

Soros, 83, made almost $1 billion from November 2012 to February 2013 on bets the yen would tumble, according to a person close to the billionaire’s family office. Michael Vachon, a spokesman for Soros Fund Management LLC, declined to comment.

Soros’s former chief strategist, Stan Druckenmiller, who made $10 billion with Soros in 1992 from a wager that the Bank of England would be forced to devalue the pound, has also been selling the yen. Druckenmiller, the founder of Duquesne Capital Management LLC, said in a Bloomberg interview in September that his firm is “short some yen,” while being “long some Japanese” stocks.

Signs that the Federal Reserve may reduce its $85 billion a month of bond purchases, which pump money into the economy and debase the dollar, are also driving the yen’s plunge versus the U.S. currency. Minutes of the U.S. central bank’s Oct. 29-30 policy meeting showed that Fed officials expected to reduce their stimulus program “in coming months” as the economy improves.

Nov. 18 (Bloomberg)– The Department of Justice said Bitcoins can be “legal means of exchange” at a U.S. Senate committee hearing, boosting prospects for wider acceptance of the virtual currency.

“We all recognize that virtual currencies, in and of themselves, are not illegal,” Mythili Raman, acting assistant attorney general at the Justice Department’s criminal division, said at the hearing.

The Committee on Homeland Security and Governmental Affairs, which solicited comments in an Aug. 12 letter, scheduled the hearing “to explore potential promises and risks related to virtual currency for the federal government and society at large” after the Silk Road Hidden Website was shut down in October. The closing of the marketplace, where people could obtain drugs, guns and other illicit goods using Bitcoins, is helping fuel a rally in the virtual currency as speculators bet that the digital money will gain more mainstream acceptance.

“The FBI’s approach to virtual currencies is guided by a recognition that online payment systems, both centralized and decentralized, offer legitimate financial services,” Peter Kadzik, principal deputy assistant attorney general, wrote in a letter dated Oct. 23. “Like any financial service, virtual currency systems of either type can be exploited by malicious actors, but centralized and decentralized online payment systems can vary significantly in the types and degrees of illicit financial risk they pose.”

Introduced in 2008 by a programmer or group of programmers going under the name of Satoshi Nakamoto, Bitcoin is being used to pay for everything from gourmet coffee to smartphones on the Internet. There are almost 12 million Bitcoins in circulation, according to Bitcoincharts, a website that tracks activity across various exchanges.

Bitcoin at Record and Senate Seeks to Discuss Virtual Money

Bitcoin’s price climbed to a record at $330.01 on the BitStamp online exchange, as U.S. senators scheduled a hearing to discuss the future of the digital money and other virtual currencies.

The U.S. Senate Committee on Homeland Security and Governmental Affairs will meet on Nov. 18 “to explore potential promises and risks related to virtual currency for the federal government and society at large,” it said in a statement today.

The price of Bitcoins has more than doubled even after the closing five weeks ago of the “Silk Road Hidden Website,” where people could obtain drugs, guns and other illicit goods using Bitcoins. While the digital money lost a third of its value in the days after the website was shut down, it’s becoming an increasingly popular way of paying for goods and services on the Web and in stores that accept the tender.

“Bitcoin is obviously getting a lot of attention from the federal government on the regulatory side,” Nicholas Colas, an analyst at ConvergEx Group, said in an interview. “Given the involvement of the currency in illegal activities, that is entirely warranted. I expect these hearings to be largely informational, which is good for Bitcoin.”

The hearing, titled “Beyond Silk Road: Potential Risks, Threats, and Promises of Virtual Currencies,” will invite witnesses to testify about the challenges facing law enforcement and regulatory agencies, and include views from “non-governmental entities who can discuss the promises of virtual currency for the American and global economies.” 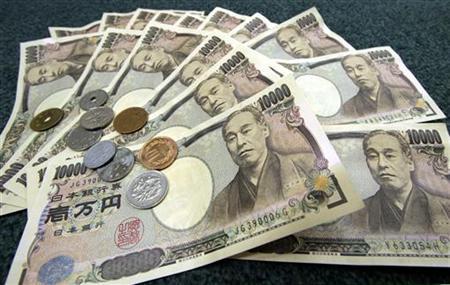 (Reuters) – Hit by a whipsawing yen in the last two months, many FX hedge funds are still determined to bet the Bank of Japan will succeed in weakening the currency over time while the dollar climbs as the Federal Reserve withdraws its stimulus.

The Fed’s first hints in May that it may start to pull back from its $85 billion dollars-per-month programme led to a rebound in the safe-haven yen as investors stampeded out of emerging markets and commodity currencies.

Reuters have reported that the Wall Street opened higher today after euro zone finance ministers agreed to a faster bailout of Spanish banks.

There was also optimism that Germany’s top court would approve the euro zone’s new bailout fund. The German Constitutional Court will consider whether Europe’s new bailout plan and budget rules are compatible with national law in a process influencing not just how to tackle the euro zone debt crisis, but how much deeper European integration can go.

The agreement by the finance ministers and the optimism about the German court helped Spanish bond yields back off the 7 percent level, which has forced other countries to seek a bailout.

The statistics this month have suggested signs of defaltion in China. In addition to the drop in CPI and PPI,  The Shanghai stock market dropped 2.37 percent, while the Shenzhen stock market fell 2.21 percent. Is China still the ideal market to invest? Let’s take a close look at the analysis done by New York Times journalist Keith Bradsher.

Prices are tumbling across the Chinese economy, according to government data released Monday, as a flood of goods pouring out of the nation’s factories and farms exceeds anemic demand from Chinese households and businesses.

The downward trend makes it much harder for businesses to sell enough goods to repay loans that they took out, usually on the expectation of rising prices. Falling prices also discourage investment, which has slowed sharply this spring, and give consumers an incentive to delay purchases until prices can fall further.

The news of falling prices, together with a pledge by Prime Minister Wen Jiabao on Saturday to maintain stringent bans on real estate speculation, produced a slide Monday in mainland Chinese stock markets. The Shanghai stock market dropped 2.37 percent, while the Shenzhen stock market fell 2.21 percent.

Consumer prices dropped 0.6 percent in June compared with May, the largest month-to-month drop in two years, the National Bureau of Statistics in Beijing announced Monday. Consumer prices were up 2.2 percent from a year ago, but only because prices kept rising fairly briskly through January of this year before beginning what has now become an accelerating descent.

As reported by Jonathan Cable and Anooja Debnath from Reuters, crumbling global demand restrained factory output in Asia and most of Europe in January, business surveys showed on Wednesday, putting pressure on policymakers to shore up growth and counter a spreading malaise.

Asia‘s export-reliant countries, while far more resilient, remain vulnerable to the euro zone’s messy sovereign debt crisis that threatens at best to tip the currency bloc into a recession and at worst to rip it apart.

Meanwhile, the first rise in German manufacturing output in four months was not enough to offset prolonged contraction in the currency union’s smaller economies and suggests that the bloc will not avoid that recession.

“There is an awful long way to go yet, and given the headwinds that these economies face I would be cautious about being too optimistic,” said Peter Dixon at Commerzbank.

“Germany continues to motor on and show a reasonable amount of dynamism, and that will drag France along and maybe Italy, but it is not really going to help the likes of Greece. You need much more buoyancy from domestic demand, which at the moment appears to be sadly lacking.”

The Eurozone Manufacturing Purchasing Managers’ Index (PMI), compiled by Markit, rose to 48.8 last month from 46.9, revised up from a flash reading but recording its sixth month below the 50 mark that divides growth from contraction.