World Led by U.S. Poised for Fastest Growth Since 2010

The world economy is primed for its fastest expansion in four years, with the U.S. propelling the improvement in output.

Global growth will accelerate at least 3.4 percent in 2014 from less than 3 percent this year as the euro area recovers from recession and China and other emerging markets stabilize, according to economists at Goldman Sachs Group Inc., Deutsche Bank AG and Morgan Stanley. The U.K. will be a standout, while Japan risks damping the mood by suffering a mid-year slowdown after an April increase in sales taxes.

“So far it’s been a very bumpy, below-par and brittle expansion,” said Joachim Fels, co-chief global economist at Morgan Stanley in London. “Next year could bring a very important transition: a transition to a sounder, safer and more sustainable recovery.”

The upturn should prove bullish for equities and bearish for bonds. If it boosts corporate confidence in the durability of growth, it could further fuel demand, raising the odds that 2014 will break the pattern of recent years and come in better, rather than worse, than projected.

“An improving global-growth picture is widely forecast but, in our view, also still doubted in the investor community,” said Dominic Wilson, chief markets economist at Goldman Sachs in New York. “We therefore see room for markets to price in a better cyclical story.”

U.S. stocks rose, sending the Standard & Poor’s 500 Index above its record close, as investors weighed the timing of any cuts to Federal Reserve monetary support amid budget negotiations in Washington.

Sysco Corp. jumped 12 percent after the food distributor agreed to buy closely held US Foods in a deal valued at about $3.5 billion. Gilead Sciences Inc. advanced 1.4 percent after getting approval for a hepatitis C pill that may generate more than $6 billion in annual sales. McDonald’s Corp. (MCD) dropped 0.9 percent after November sales missed analysts’ estimates.

Slideshow: The Best and Worst Investments of 2013

“People are getting more comfortable with the idea of tapering and the concept that the reason for the taper is that the economy is getting stronger,” Walter Todd, who oversees about $950 million as chief investment officer of Greenwood Capital Associates LLC in Greenwood, South Carolina, said by phone. “At the end of the day that’s a good thing not a bad thing. For the next week it’s just going to be speculation around the timing.”

Mark V. Shoen had to endure his father’s suicide, a sister-in-law’s murder and an internecine battle on his way to becoming the largest shareholder of Amerco, the parent of truck rental company U-Haul, North America’s biggest moving and storage business.

Becoming a self-storage baron required additional drama, if only in the courtroom. Shoen’s storage empire was the center of a decade-long shareholder suit that splintered his family and left the 62-year-old in control of a business that made him a billionaire.

“The sexy stuff is the lawsuits and fistfights in the boardroom,” Sahm Adrangi, chief investment officer at New York-based Kerrisdale Capital Management LLC, said by phone. “But it’s not relevant to U-Haul anymore. This company has had the same core management team for years.”

Demand for trailer and storage-space rentals has increased as the U.S. housing market rebounds, according to Adrangi. Amerco has jumped 75 percent this year, while the U.S. self-storage sector has rallied more than 11 percent, according to data compiled by Bloomberg.

The performance has boosted Shoen’s personal fortune. He owns 3.8 million Amerco (UHAL) shares valued at $845 million, and controls 437 storage facilities, almost all of which were purchased from Amerco with $600 million in company-backed loans, according to a 2011 legal opinion of the Supreme Court of Nevada.

The self-storage businesses had combined sales of about $440 million for the year ended March 31, according to data compiled by Bloomberg, making it the largest self-storage company by revenue after Glendale, California-based Public Storage. (PSA) Shoen has a net worth of $3.6 billion, according to the Bloomberg Billionaires Index, and has never appeared on an international wealth ranking.

“They want people to know how well the company is performing,” he said. “The best way they know how to make that statement is to put their nose to the grindstone and press forward and do what they know how to do well.”

Carl Giannone says he’s given up hunting for quality stocks. Now he’s simply riding the wave of upward momentum in the U.S. market.

“It’s a game of musical chairs,” said Giannone, who manages an equities team at T3 Trading Group LLC in New York. “You just want to make sure you can sit down.”

The Federal Reserve’s near-zero interest rate turns five years old next month, the longest period without an increase in history. Coupled with more than $3 trillion of asset purchases, it adds up to “Bernankecare,” said Joshua Brown, chief executive officer of Ritholtz Wealth Management in New York. And it’s causing parts of the market to behave strangely. Stocks of companies with weak balance sheets are rising twice as fast as stronger ones; junk borrowers get rates lower than their investment-grade counterparts did before the credit crisis; and initial public offerings are doubling on their first day of trading.

While in the minority, some investors say prices have climbed so high it’s possible to look ahead and see an ugly end. Laurence Fink, chief executive officer of BlackRock Inc., the biggest U.S. money manager, said in an interview with Bloomberg Television on Nov. 12 that he feared a bubble and the Fed ought to quit buying so many securities.

“At some point we’ll have to pay the price of this,” said Michael Shaoul, chief executive officer of Marketfield Asset Management LLC in New York. Among the woes Shaoul foresees: “higher inflation, higher interest rates, much more difficult business conditions.” But it’s a long way off. “I would be very surprised if this bull market ended sooner than 18 months, and maybe it’s 36 months,” Shaoul said.

Almost everything in the equity market is rising, which worries Jamie Potkul, chief investment officer of the Bread & Butter Fund. About 450 stocks in the S&P 500 are up this year, making it the broadest rally in at least two decades. That’s left investors with fewer buying opportunities than during the technology bubble in 2000, when the rally was propelled by an ever-shrinking pool of dot-com stocks, Potkul said.

At the same time, investors are awarding some of the highest valuations to companies that have struggled to produce consistent profits. Amazon Inc. (AMZN) trades at about 1,300 times reported earnings. Netflix Inc. is valued at 197 times income and Consol Energy Inc. has a price-earnings ratio of 104.

An investor bought $13 million in call options on the Chicago Board Options Exchange Volatility Index, betting the gauge will rally at least 88 percent in the next four months.

About 100,000 VIX March calls were purchased with a strike price of 23 for about $1.30 each, according to Trade Alert LLC. The contracts were among the five most-traded on U.S. options exchanges today, based on data compiled by Bloomberg.

In another transaction, a person spent $5.1 million in a bet that the Standard & Poor’s 500 Index will rise more than 10 percent in the next three months. The trade involved buying about 31,000 February calls for about $1.65 per contract with an exercise price of 1,975 on the U.S. equity benchmark, according to Trade Alert.

“The S&P 500 (SPX) trade looks like a melt-up trade and the VIX trade is the melt-down trade,” Justin Golden, a partner at Lake Hill Capital Management LLC, said in an e-mail. The New York-based hedge fund trades options on equity indexes and commodities. “Either way, in order for either of these to pay off you need significant movement in some direction.”

The two trades — one that makes money with higher volatility, the other profiting with equity gains — show seemingly opposing wagers on the direction of the stock market as investors gauge the prospect of continued monetary stimulus after a four-year bull market. The transactions may be used to speculate on the direction of the VIX (VIX) or S&P 500, or to hedge swings in other investments.

The S&P 500 is up 25 percent this year, putting it on track for the biggest annual gain since 2003, as the Federal Reserve maintained bond purchases to spur economic growth and corporate earnings topped analysts’ estimates. Investors may see political turmoil over the next three months as Congress’s self-imposed deadline to agree on a fiscal 2014 budget comes next month and the law now funding the government expires Jan. 15.

The next mayor of New York: guy who pours his coffee 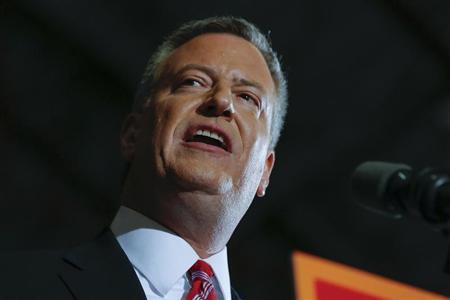 “About two years after he started coming in almost every day, he comes up, he puts his hand on the counter, he looks at me and he goes, ‘Nick, I love your place, but your coffee sucks,'” said Kolosakas, the diner’s owner.

De Blasio, who will take office on January 1 as the first Democrat to lead City Hall in two decades, has made much of his regular guy persona and has sought to contrast himself with outgoing Mayor Michael Bloomberg – New York’s richest person, who lives in a townhouse on Manhattan’s Upper East Side.

In Brooklyn’s Park Slope neighborhood, where de Blasio and his family have lived for decades, he is often seen taking out the trash at his 11th Street house, ordering black olive pizzas at Smiling Pizza on 9th Street and renting DVDs at the movie-rental store near the Seventh Avenue subway stop.

De Blasio will be the city’s first mayor with a child in public school. He hosts political events at the Italian restaurant across the street from his house. When his wife, Chirlane McCray, picked a dress to wear to de Blasio’s victory speech on election night, she chose a local designer whose clothes are sold at a Park Slope boutique near their home.

Park Slope, with its tree-lined streets and brownstone row houses, seems far from Manhattan. It is considered one of the city’s most child-friendly neighborhoods, a place many Manhattanites have escaped to in search of quiet.

Local business owners and neighbors said they have watched the evolution of the politician, who was elected to the city council in 2002 and in 2010 became public advocate.

Kathy Smelyanski, owner of the Video Gallery, a movie-rental shop a few blocks from the de Blasio family’s home, recalls the 6-foot-5 (1.96-meter) politician showing up to rent the documentary “Wal-Mart: The High Cost of Low Price,” to screen to his staff at a time when the council was considering whether to allow Wal-Mart Stores Inc to open in the city.

The retailer lost it bid in September 2012, as a result of fierce opposition from union groups and politicians, including Public Advocate de Blasio, whose office published reports stating that Wal-Mart’s entry would eliminate jobs.

JPMorgan Chase & Co., the target of at least eight Justice Department investigations, was mocked and taunted by Twitter users after asking followers to send questions to an executive using the hashtag #AskJPM.

The online forum, which the bank canceled late yesterday, was intended in part to give college students an opportunity to communicate directly with a senior executive, said Brian Marchiony, a spokesman for the New York-based company.

“#Badidea! Back to the drawing board,” the bank posted less than six hours after its original post, which drew more than 6,000 responses from users in that span, according to social media tracking service Topsy.

The “Snarkpocalypse,” as @ReformedBroker dubbed it, started after the bank’s official Twitter account posted a call for questions at 1:26 p.m. in New York for investment bank Vice Chairman James Lee, using #AskJPM.

JPMorgan, the biggest U.S. bank, faces criminal probes including one into possible bribery in Asia and another examining its relationship with Ponzi scheme operator Bernard Madoff. The firm also has been negotiating an agreement with the U.S. to resolve multiple mortgage-bond probes, and two ex-employees were indicted for allegedly trying to cover up a record trading loss last year.

JPMorgan’s call for questions provoked jeers from Twitter users, who responded with sarcastic posts about the bank’s mounting legal woes.

“Can I have my house back?” @AdamColeman4 posted. “Is it true ‘JPM stands for ‘Just Pay More’?’’ asked @SconsetCapital.