An official gauge of the mood among consumers and businesses showed Thursday that the euro zone economy remains fragile, with manufacturers and builders growing more pessimistic about their prospects even though the sovereign debt crisisseems to have eased, the New York Times reports.

The economic sentiment indicator compiled by the European Commission, based on surveys of business managers and consumers, slipped by 0.1 point to 94.4. A reading below 100 points indicates that pessimism prevails and adds to evidence that the euro zone economy is in recession. The sharpest drops in sentiment were among manufacturers and builders, offsetting improvement among consumers and retailers.

There was some good news for the region on Thursday, as a new report showed German unemployment fell, continuing to defy the trend in the rest of the euro zone. At the same time, a decline in orders for German machinery and other industrial goods showed that the country is not immune to the problems afflicting its neighbors.

Despite their success selling cars and machinery to China and other emerging markets, German exporters remain dependent on other euro zone countries for sales. 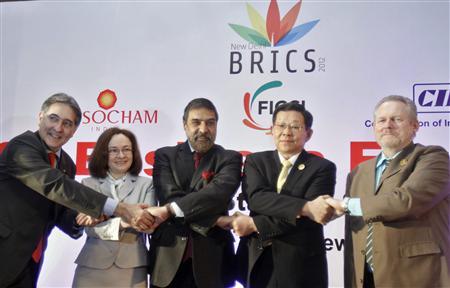 “This dynamic process of reform is necessary to ensure the legitimacy and effectiveness of the Fund,” Brazil, Russia, India, China and South Africa said in a joint declaration after their one-day summit in New Delhi.

“We stress that the ongoing effort to increase the lending capacity of the IMF will only be successful if there is confidence that the entire membership of the institution is truly committed to implement the 2010 Reform faithfully.”

Promised changes to voting rights at the IMF have yet to be ratified by the United States, adding to frustration over reform of the G7 and the U.N. Security Council, where India and Brazil have been angling for years for permanent seats.

European governments are preparing for a one-year increase in the ceiling on rescue aid to 940 billion euros ($1.3 trillion) to keep the debt crisis at bay, according to a draft statement written for finance ministers, Bloomberg Reports.

The euro-area finance chiefs will probably decide at a meeting in Copenhagen March 30 to run the 500 billion-euro permanent European Stability Mechanism alongside the 200 billion euros committed by the temporary fund, a European official told reporters earlier today in Brussels.

Beyond that, they are also set to allow the temporary fund’s unused 240 billion euros to be tapped until mid-2013 “in exceptional circumstances following a unanimous decision of euro-area heads of state or government notably in case the ESM capacity would prove insufficient,” according to the draft dated March 23 and obtained by Bloomberg News.

The boost to the war chest would come after Chancellor Angela Merkel of Germany, the dominant power in two years of crisis fighting, this week warned of “fragility” in Portugal and Spain. It would also be designed to lure the rest of the world into putting more money into the International Monetary Fund’s arsenal.

The jobless rate in the U.S. could drop to as low as 6 percent by the first half of 2013, a bigger decrease than most economists currently project, according to research from the Federal Reserve Bank of New York, reports Bloomberg.

The relationship between the number of Americans newly unemployed and those recently finding work indicates joblessness will continue to decline, according to economist Aysegul Sahin. The jobless rate held at a three-year low of 8.3 percent last month after falling by 0.8 percentage point in the year ended January, according to figures from the Labor Department.

“Simulations based on historical patterns suggest that the fall in the unemployment rate could be quicker than many forecasters predict,” Sahin wrote in a note on the bank’s Liberty Street Economics blog co-written by research associate Christina Patterson.

The analysis looked at flows into and out of unemployment since the end of World War II, likening it to water in a bathtub. The unemployment rate, or level of water in the tub, would be determined by the difference in the volume of water pouring in and draining out.

The number of those exiting unemployment, which include people finding a new job as well as those leaving the labor force, takes precedence in determining changes in joblessness at this stage of a recovery, the economists found.

Head Of Equity Derivatives Structuring: ‘Structurers Are Like Snakes’

There’s a reason we have all this martial language on the trading floor. ‘Rip someone’s face off’, ‘working in the trenches’, take no prisoners’. A rule of thumb in trading that I learnt very early on, says: there is a fool in every trade. You have to know who the fool is, because if you don’t, then you are the fool. The financial markets are a shark tank, it’s in the nature of the beast. Trading is a zero-sum game. Either you win, or you lose. There’s no middle ground, (via HITC.)

“It’s a very small world, equity derivatives, and there were at the time maybe only a hundred people in London in my line of work. Very specialised. We are going to have to keep some things vague. I was in equity derivatives structuring for about a decade and got out some time after the crisis. I’ll tell you later why.

“Structuring is a bit like project management, in a way. You need to work out what it is that your client, often a corporation, wants, because they often come to you with rather vague ideas. Then you break it down into pieces and work your way down the list of what needs to be done. Figure out which financial instruments they need, work down the legal and tax aspects, and so on.

“We might have an airline worried about higher oil prices, and not really knowing what to do. Would they want a hedge – a kind of insurance to protect them against price rises?

A preliminary measure of Chinese manufacturing fell to 48.1 in March, the lowest level since November, according to data from HSBC Holdings Plc and Markit Economics. A euro-area gauge of services and manufacturing output dropped to 48.7 from 49.3 in February, London-based Markit said in an initial estimate today, below all but one forecast in a Bloomberg News survey of 21 economists. Readings below 50 indicate contraction.

“This reinforces a sense that growth is slowing down, but for China at least we think we come out on the other side of this with easing,” John Lomax, an emerging-markets strategist at HSBC, said by phone from London. “For Europe, it’s a bit more problematic in that Europe doesn’t have the ability to change policy in the same way, and it suggests a recession this year.”

The index of U.S. leading indicators rose in February by the most in 11 months, signaling the world’s largest economy will strengthen, as reported by Bloomberg.

The Conference Board’s gauge of the outlook for the next three to six months increased 0.7 percent after a revised 0.2 percent gain in January that was less than initially reported, the New York-based group said today. The median forecast of economists surveyed by Bloomberg News called for a 0.6 percent rise.

More hiring and a jobless rate that held at a three-year low last month may encourage Americans to boost their spending, which accounts for about 70 percent of the economy. Strengthening demand may also drive production gains at factories, helping to sustain the expansion and allowing the U.S. to withstand higher oil costs.

“The general picture will be gradually improving,” Nigel Gault, chief U.S. economist at IHS Global Insight in Lexington,Massachusetts, said before the report. “We’re clearly getting good signals from the labor market.”

Estimates of 49 economists in the Bloomberg survey ranged from gains of 0.3 percent to 0.8 percent.

Eight of the 10 indicators in the leading index contributed to the increase, led by fewer Americans filing first-time claims forunemployment benefits and by a surge in stock prices.